Acrylic on Upson Board (you can’t hardly find Upson anymore) painted in 1966.

Green skies may seem unusual but, after a storm there are moments when the atmosphere is charged with yellow sunlight into blue water vapors(yellow and blue make green). This effect does not last long and is usually excused by the eye which sees the water as bluegreen, and the sky as blue violet (after a storm), but look again next time a storm passes you overhead, and for a few breif moments it will be there for you. I have done several such scenes and almost always get a comment about the green skies. At first I wondered about my own vision? Monet said to his doctor, of his eye exam, “You mean there are not halos of radiance glowing from within and around things?” Because that is what he saw and painted, and I asked of my own eye exam. The doctor informed Monet that he had impaired vision causing a halo effect. After taking color tests, if anything I was informed of a very slight green deficiency in my sight, so I must be painting a little less green than is there. Monet was painting a little more everything than was there.

During the late 1960s I produced a number of “green sky” paintings, and recently began to wonder if the atmospheric conditions of that time may have been different than now, the Mount Pinatubo effect, so to speak. 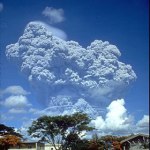 [Mount Pinatubo-photo] is  located on the island of Luzon in the Philippines. The volcano’s  erupted on June 15, 1991.

It ejected roughly 10,000,000,000 tons  of magma, and 20,000,000 tons of SO2, putting huge amounts of minerals and metals to the surface environment, forcing large quantities of aerosol into the stratosphere. Over the following months, this formed a global layer of sulfuric acid haze. Global temperatures dropped by about one degree. After the eruption the sky changed to a silver violet hue that lasted 3 years, although it was a very beautiful hue, it was a poison gas pollutent . There is evidence in the old masters paintings of sky hue colors that may betray other geological events not understood at the time of the painting. Not all color choices were artistic, some were a visually inspired response to what was being seen. What ever the facts, I saw green skys and still do at times, and if for artistic purposes I feel that a green sky fits how I feel about an image at some times. Artistic license or science?

Got your ducks in a row

To be human in public.

A Quiver Of Quotes

Quotes that set the mind aQuiver.

I'm studying art with my grandpa John Michael Cook. Read all about our adventures!

Resources for women writers, interviews with female authors & reviews of books by women

Graphic Designer / Digital Artist & Photographer. I love Nature, Animals, Tropical Sun, Bright Colors...I am eclectic, chameleonic, and love to pass through different styles and to use Bright, Bold, Exotic Colors!...but my Dark Side is not so far...

An artist with an irresistible urge to create!

From a retired writer living on the Sunset Coast of Australia.

where the past is always present

(re)Living History, with occasional attempts at humor and the rare pot-luck subject. Sorry, it's BYOB. All I have is Hamm's.

The life of a rescued throw away dog, her family and their incredible journey.

You Can't Direct the Wind, But You Can Adjust Your Sails

Healing Your Heart From Within

Decided to dance a little deeper in life, and wow can spirit dance!

Finding my way back out of motherhood -- while mothering

Author of The Sound of Water and other books

The "Good Life" on a quarter acre, frugal living

A writer who designs & a designer who writes

Life is a journey where choices are made every moment

Sharing My Love of Symbols

Bringing beauty to the world through music

A Writer with a Difference

the impressions are are not to be taken literally

Vegan-Friendly Stories for all ages